Skip to content
Harmonious Pathways > Blog > Uncategorized > Do It Differently

We humans are creatures of habit—and for good reason. Habits help us live efficiently and do important things each day, like brushing our teeth. Our habits are formed by trial and error. As babies we learn to push ourselves up, roll over, and eventually pull ourselves up to stand. And we receive loads of accolades when we do. Our curiosity spurs us to constantly explore new things—until we fall or are told “No!” which can be confusing and make us feel bad. As we grow, the conditions of our lives begin to shape our thoughts, feelings, and actions that can ultimately shape our destiny. We can remain creatures of habit or we can do it differently, try something new, move out of our comfort zone. When we do, brain science tells us we will be enriched. 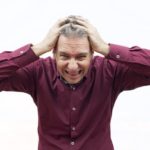 As our bodies grow, our brains also grow. Our brains are trained to favor familiarity and, from an evolutionary perspective, keep us safe from predators. Safety and comfort take on a whole new meaning with the seemingly predatorial pressures of contemporary living. Our distress and anxieties are often rooted in a fear of failing. Playing it safe and doing what we have always done seem to be easiest course—until a major change disrupts things. Then resistance and resentment may surface and we ask: Why did this happen? Why did they have to change things? Why can’t it be like it was? Why do I have to do it differently?

Neuroscientists tell us our brains have plasticity—i.e., they can adapt to newness no matter our age. Our thoughts, feelings, and actions light up brain circuits, or neural pathways, and establish new connections. These pathways are reinforced the more they are lit up, becoming deeper and stronger. Because of the brain’s plasticity, we can start a new path, make new connections, and develop a new habit by intentionally and consistently trying a new way.

Researchers have shown that it takes three weeks to create a new habit. If we are starting a diet or have the desire to change a self-limiting thought or belief about ourselves, we need to give it a fair chance so the new pathway can establish itself. It’s important not to resist, but trying to drop old patterns of thinking should be avoided as well, as it may strengthen the old way. The brain reinforces whatever we focus on—positive or negative. Research has shown that simply thinking and imagining a new way of being helps build new neural pathways. 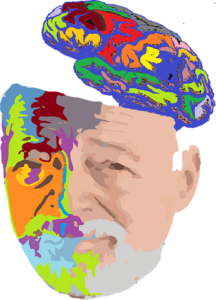 As our bodies age, we can accept, and therefore reinforce, the notion that physical and mental decline is inevitable. Or, our brains and our bodies can defy physical and cognitive decline by recapturing the spirit of curiosity of our early years, by letting go of habitual living.

We can defy physical and cognitive age by doing things or wearing things or connecting with things from the past that make us feel younger. In 1979 Ellen Langer, a Harvard psychologist and author of Mindfulness, carried out an intriguing experiment known as the Counterclockwise Study. She selected a group of men in their late 70s and, for a week, put them in a 1959 living situation. All accoutrements of their environment—furniture, décor, news, sports, music, TV, movies—were from the earlier time. They were instructed to behave as if it were actually 1959, like discussing historical events as if they were current. The results: the men’s physical strength, manual dexterity, gait, posture, perception, memory, cognition, taste sensitivity, hearing, and vision significantly improved—by a minimum of seven years.

Nearly thirty years later, in 2010, Langer collaborated with the BBC to recreate her experiment with six former British celebrities in their 80s. They were transported back 35 years—to 1975—by similar means, and they too emerged after a week notably rejuvenated—in some cases up to 20 years younger than their biological age.

In recent years a new field has emerged called neurobics. You may have seen advertisements for mental exercise programs to enhance memory and focus and even change negative self-talk. These programs claim that practicing neurobics regularly can keep your brain fit. Neurobics works to keep brain pathways active and actually create brain food molecules linked to memory called neurotrophins.

Research by Moses Chao, a psychiatrist at NYU Medical School, found that using nondominant hand activity like brushing your teeth with your “other” hand produces neurotrophins that boost memory. Chao also discovered the same enhancement of memory with physical movement and exercise. He refers to this as “Miracle-Gro” of the brain nerve cells. He says we should keep moving and be like children, always in motion. 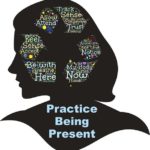 There are three main components of the neurobics system. One is expanding the use of all our senses: vision, hearing, smell, taste, and touch. Sensory data generally pass through the thalamus en route to dedicated areas of the cortex designed to process them. Most of us use vision and hearing regularly but the other senses less so. We can use our senses in novel ways, such as closing our eyes while showering or eating or watching TV without the sound.

A second component of neurobics is giving your full attention to something, like trying an activity that is completely new to you, perhaps bird watching or learning a new language. And finally, a third component, is to break from your normal daily routines. Take a new route to work or to the supermarket. Shop at a new store. Rearrange your desk, workspace, or furnishings. Move art work in your home to different locations. Buy a new outfit that is not be your usual “style.” Let your imagination soar!

Neurobics has much in common with mindfulness practices like eating in silence and savoring the tastes and smells. One mindfulness neuroscientist recommends the practice of self-nurturing touch. Spend a few minutes periodically during your day gently stroking your hands, arms, and face in the most pleasurable way possible.

Langer defines mindfulness as simply “actively noticing new things,” which she says energizes and engages us and opens us up to new possibilities. We then become more aware of our environment and more sensitive, understanding, even compassionate. Langer recommends that we notice five new things about a partner, friend, or colleague. Noticing is also listening objectively to others’ viewpoints and being curious about how they came to their opinion. 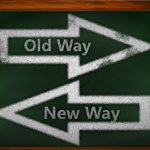 Beware that the brain is always on guard to potential threats and therefore is resistant to change based on the perceived fear of failure. This fear is really our imagination, a fantasy run amok, according to neuroscientist Andrew Newberg. The more we reinforce the fear “Maybe I’ll fail,” the more likely it will become “I’m going to fail.” Newberg, who is the director of research at the Marcus Institute of Integrative Health at Thomas Jefferson University, recommends practicing affirmations and loving-kindness meditation to reach a state of relaxed awareness where you can observe the fantasy for what it really is. You can then change the failure fantasy to “I might fail and I might succeed.” Ask yourself what it would feel like to succeed. Focus on that feeling and proceed with actions.

As I reflect on my life, there has always been a part of me that relished change and new experiences. My early years of solo foreign travel expanded my appreciation of people living in different cultures. Yoga, belly dancing, and Argentine tango have each created deep body awareness. My work as a recruiter, then as a coach and a facilitator of iRest Yoga Nidra Meditation has reinforced my compassion for people and their circumstances. My newest venture has been completing a Clinical Somatic Education certification training and empowering teaching and teaching people simple movements to relieve their own chronic pain. I’ve found that doing things differently than I had previously has greatly enhanced my confidence and courage.

Are you ready to approach your life differently? Try something completely new. Change a deeply rooted habit. Learn about and challenge your memory with neurobics. Then relish what you’ve done for yourself.